Hi!
It's been a long time since I've online journaled and a LOT has happened since my last entry. Since the last post, I have driven in a tiny civic playing shows across the country, backpacked Thailand, visited Texas, got stuck in Chicago, showcased at Toronto's bi-annual blues summit/attended the Maple Blues Awards, moved into a new house, and showcased at the International Folk Alliance Conference in Kansas City. There are plenty-a-stories I'd love to relay of the last 5 months' happenings, and I hope to within time, but there's one in particular that continues to ring with me so I've decided to share it with you. :)

As some of you may know, I was born in Chiang Mai, Thailand. It's difficult to explain what this means to me; being born there has become a part of my identity. I've been curious my ENTIRE life about the culture, people, colours, smells, food, and landscape of the country and I think a lot about what my mum and dad must have went through while they travelled India and Thailand pregnant with me. So, a couple months ago, along with my best friend Lisa, I flew across the world to finally satisfy my eyes with the pictures I've been craving to see for my entire existence.

The story I want to share specifically though, is the one where I visited the hospital I was born in: McCormick Hospital.

Lisa and I dedicated a whole afternoon to walk over to McCormick which is outside of 'old city' in Chiang Mai. We left our favourite hostel and took our Berkenstock aching feet down the same road we entered the city on. I recognized the hospital right away from the picture my mum and dad had shown me before I left. I remember feeling a sort of nervousness/excitement; it was as if I was walking in a dream! I was taking the same steps my young parents took 25 years ago. As I mentioned before: my WHOLE life I've been wondering what this place looks like! We enter the hospital and there are some Thai guys building a Christmas tree out of neon mountain dew bottles. The hospital is CLEAN and very pretty with salmon-coloured floors laid ahead. The nurses were incredibly warm, and constantly smiled at Lisa and I - the foreign travellers invading their beautiful hospital! I approached them right away and inquired about Dr. Chit Ari (who was my doctor nearly 26 years ago). It took a couple tries before they understood me but they got on the phone and... called her department. I was SHOCKED that she's not only still alive but still WORKING at the same place. She wasn't working that day but we were invited to come back later the week to see her. After receiving the crazy news, Lisa and I explored the building for awhile. It is honestly the sweetest hospital I've ever been in. There's an outdoor courtyard with trees and green grass right in the centre which is enclosed by several floors of circular walking ramps - like a three story veranda. I also felt connected to my young parents - scared, nervous, excited - walking amidst the same walls.

So, later that week, Lisa and I walked back to the hospital. The mountain dew Christmas tree was finished haha. I approached a new nurse and asked if I could see Dr. Chit Ari. It was fun but difficult explaining that I wasn't there for an appointment - just for a hello! "Sa-wa-dee-kaahh!" We followed her to a new area and passed a man playing Beethoven on a grand piano! I loved it. We were seated outside of a door that read "Dr. Chit Ari" on it. I couldn't BELIEVE it. The door opened and a young, travelling, pregnant couple exited and behind them was Dr. Chit Ari...Right there! Right in front of me! And still taking care of pregnant travellers! When the couple walked away,  Dr. Chit Ari turned to me - and I couldn't help it - my eyes started flooding and I shakily said "Hi". I told her that she was my doctor and I came from Canada to meet her..."I came to see YOU." Without hesitation, she hugged me then held onto my arm and my waist and had me walk with her. As we walked she told that she's 75 and has been working at McCormick for 50 years. Meanwhile, I was trying my hardest not to let my tears overflow because I was so overwhelmed. Dr. Chit Ari stopped and asked a nurse to take our picture. SHE asked! And she has a smart phone haha!! AND SHE was crying!! She was just as overwhelmed as I was. Seeing her eyes water did not help mine from spilling. There was something so extraordinarily genuine and empathetic about her. I couldn't believe that SHE was the one asking for a picture and crying. She brimmed with love and with warmth. Here I was, across the world, holding onto this gentle and kind spirit who is MUTUALLY touched by my visit. Anyways, after our picture was taken, she asked me if I wanted to see the delivery room. Again, she held on to me as we walked and didn't let go. The delivery room was a bit cold and creepy (I've also never seen one prior), but it was surreal to see the room I was born in.

After seeing the room, Dr. Chit Ari had to go back to work but before she left she asked Lisa and I if we'd like to go for dinner the coming Friday. She said she'd pick us up at our hostel! What!.......!??!! The mystery woman I didn't even know would be around asked us for dinner!

When Dr. Chit Ari left, the nurse asked me if I'd like to see the hand-written records of my birth. She led us to another room nearby and opened a cabinet. Everything in the hospital up to this point was so clean and organized but what she revealed under this counter were random dusty objects and 7 or 8 huge spell-like looking books with brown leather jackets. She searched for my birthdate and I saw it... the real data! My mum's name, her weight, her expected due date, her age, my weight, time of birth, etc. The PROOF! It was CRAZY to see! Here, thousands and thousands of miles from home, my mum's name is hand-written in this random book, sitting underneath a dusty shelf. The nurse pointed at the book and said "history" which made Lisa and I laugh. We hugged the nurse and thanked her a million times.

When we walked out of McCormick, I was completely drained. I couldn't believe all that had happened. Just going to the hospital the first time and walking around was more than enough. Meeting Dr. Chit Ari then witnessing her kindness and tears was one of the most overwhelming and beautiful experiences of my entire life. There's something about her voice and her energy... this world is most definitely a better world with her in it. I'm inspired and moved by her.

Unfortunately, Lisa and I did not make it out for dinner with Dr. Chit Ari because our travels pulled us more north. Getting ahold of Dr. Chit Ari, from the small town of Pai, was a MASSIVE adventure within itself, but the heavens were glowing in my favour and I managed to. It broke my heart to cancel our dinner plans, but being the gracious woman that she is, she was empathetic - and she was able to show that when she barely speaks English! The last thing she said to me over the phone was "give my regards to your mother" which made me burst into tears and I promised I would. I can still hear her voice. Dr. Chit Ari's compassion and warmth has affected so many people. I can't imagine how strange it must have been to have a 25 yr old girl show up, crying, at her workplace with a big statement like "I flew from Canada to meet you" but she seemed to share an equal interest in me and I'm forever moved by it. 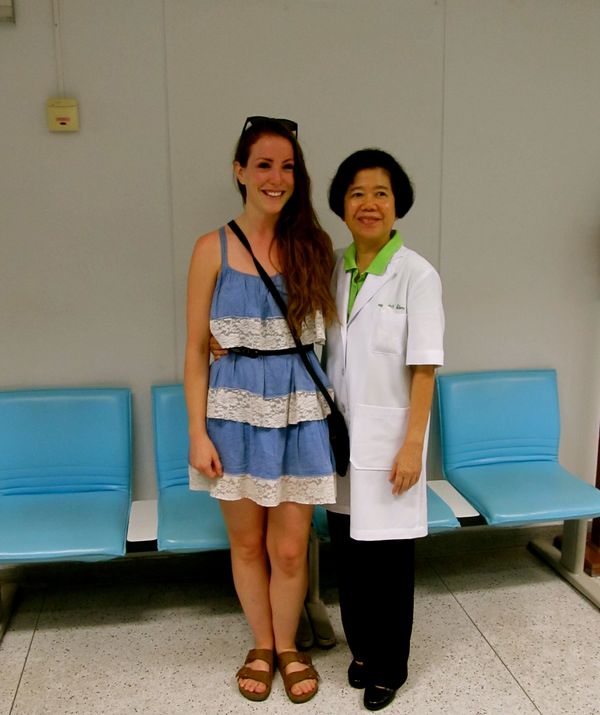