So naturally, you'd predict that I'd wake up with butterflies and confidence from years of preparation. But nope. It was the exact opposite. I woke up with laryngitis. No voice. Three weeks prior, some crazy flu took hostage of body and refused to get the eff out. At first I thought, "Well, I have three weeks, that's loads of time to recover", but instead, I became sicker and weaker to the point where I had nothing but air coming out of my throat. No coffee, no talking, cancelled all gigs, throat coat teas, lozengers, cough syrup, face steams, nasal spray, gargled salt water, puffer, slippery elm tea, hot showers, lip buzzes, tons of sleep, weird herbal pills.... for weeks! You name it and I did it.

Fighting a deep wave of anxiety and flood of tears, I got out of bed and began a long day of chugging water. I tried to lightly sing through a verse and nothing came out at all. Empty air. Panic. Am I going to publicly humiliate myself when I get on that stage? Should I back out?  Can I find a sub for.. Massey Hall?

I decide to put these nagging worries to rest, as best I could, and just go through the motions of the day and see what happens. My loving partner drops me off outside of Massey. Soundcheck time. The whole band is on stage; they've been there for hours already, loading in and sound checking. Their energy is so great and they all give me big welcome hellos as I get ready to run through a song with them. I start singing into the mic and what I hear back is a frog. With no range. Where are my big high notes!?!?! Who's that croaker? Frick!!

After sound check, I went to my dressing room (who I was sharing with Sue Foley, Carmen - a flamenco dancer, Carmen's daughter, and Andria Simone!) and just tried as best as I could to L.a.y. L.o.w. which was tough because there was a ton of energy and excited exchanges between the other singers, band members, and staff. But, there I was, drinking licorcie tea (thanks to Shakura S'aida!), applying mascara, and HANGIN' backstage at Massey Hall! I tried to focus on being as present as possible and soak in the whole experience of the Massey Hall dressing room life. I had great roommates and especially liked getting to hang with Sue as I really admire her.

10 mins before showtime, Shakura called a group meeting. We huddled in a circle and said our names. Then she asked us to think about one word our name represents and say our name again. This small notion gave me the positive surge of confidence I had been seeking for 3 weeks. It somehow grounded me because I just felt a friendly reminding wave of assurance that it's OKAY to be myself! Whatever sound my vocal chords release is where I am at in the moment and it's just going to be part of my experience on this long life journey of singing.

I put on one heck of a sparkly dress, gargle a shot of whiskey, swallow it, then head to the side stage. The show starts. Andria is OWNING the stage. The crowd is going totally wild! I slowly feel my nerves shift from anxiety to excitement! I've got this! Andria leaves the stage and I hear Shakura introduce me. My legs are moving one after the other, across the wooden stage and I feel my hand lifting and waving at the crowd. They're screaming! I haven't even done anything yet! Instead of greeting the audience, I launch into my first song - "Night on Fire" - a high energy tune with great horn parts (whichwill be on my next record!) - and I start... singing!... No croaking!!...... My voice is slightly more raspy and I definitely don't have as much control as I'd like - but it's there!! I can't believe it! After the song ends, I pause for a minute to truly take in the three tiers of cheering people. 2,000 people are whistling/applauding for ME! And in that room, it sounds like 10,000. Typically, my excited nature and hustle attitude urges me to launch into the next tune. But, there, on the historic stage, I just decided to fully appreciate the sound of the applause and also let everybody know how much I appreciated it. I love Neil Young's album "Live at Massey Hall" - - - the encore applause is deafening on that record, and I was experiencing the same thing!! Four years ago, on that day, was the first time I had ever even been to Toronto and I went to the Blues Women's Revue at Massey. I remember sitting in the seat with my fingers crossed under my legs hoping for the day I would get to be on the other side of the seats. Four years later, I was doing it!! My next tune was a ballad I wrote - "I Can't Keep Waiting" - that has belting high notes at the end - - - nailed them!!!! Again, in awe. I finished my set with a tribute to Jane Vasey - a phenomenal piano player that used to play with The Downchild Blues Band 35 years ago but passed away from leukemia. She was very loved in the community and it was an honour to pay homage to all the musicians that have inspired me and keep the river of music flowing. I had the band drop out, and did a big piano solo with just the drums behind me, really trying to boogie woogie the crap outta that stage!! The same stage visited by Bob Marley! Bob Dylan! Oscar Peterson! Charlie Parker!

The set flew by. I wish I could have bottled that feeling and that applause and that sound and that energy and made some sort of weird perfume out of it so I could spray those 15 minutes on me whenever I wanted to feel it again.

The rest of the evening flew by. Kelly Lee Evans, Sue Foley, Dawn Tyler Watson, and Shakura S'aida were all SO good! The finale song. Merch table. Bar hangs. Standing next to all the pictures of previous performers, and soaking in the fact that I'm now one of them. My night ended with old friends and laughs at a famous pizza parlour on bloor street.

The following day, all the women involved in the show were invited to Ricarda's (a very high end restaurant downtown) for brunch. This may have been the best part of the whole experience. Getting to rehash out the show with the musicians and expand my community was really special. Thank you Lucie Default for giving us such a gift!

Anyways, I'm going to stop my coffee fingers from making this entry even longer. It was fun to sit here and re-live my Massey Hall experience. Playing music can be such a difficult road, but having a golden nugget night is now part of my internal flame I resort to when I need a reminder about why I love this path.

THANK YOU to Derek Andrews, Richard Flohil, and Toronto Blues Society for everything!!

And thank YOU for reading!! It means more than you know! 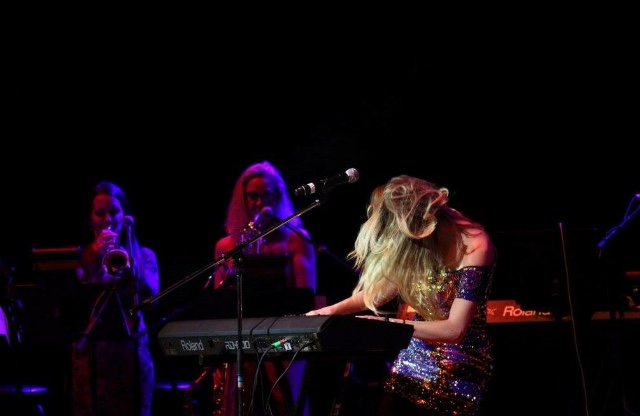